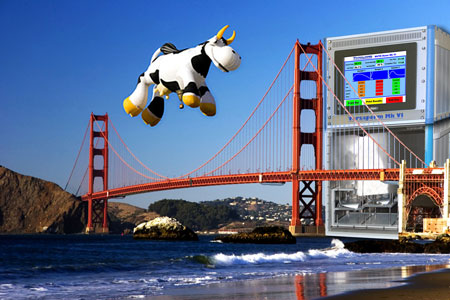 Airships are an ecological way to travel and have made a considerable resurgence over the last few years, due largely to improvements in technology in general along with the new generation of mass-spectrometry (and other) vapour permeability measurement equipment.

The most critical aspect of airships and blimps is the obvious one - that they remain lighter than air - which means they must retain the helium or hydrogen to provide lift. However, because helium and hydrogen have the smallest molecules of any gases, they usually permeate through the "Gas bag" much faster - and every fabric ever made lets gas seep or permeate out to a greater or lesser extent.

Over recent years this "seepage" of gas through the fabric of an airship has actually become a bigger problem than all of the usual leaks put together!.  The fabrics of yesteryear have given way to a new range of laminated "technical" textiles and the vapour permeability of the gas bag has become both the critical factor in the overall airworthiness of the craft - and also one of the most important safety-critical tests.

As airship technology has evolved the focus has moved to optimising fabric weight, flexibility and strength, along with improving helium and hydrogen barrier properties. Because the techniques, methods and standards for measuring the all-important vapour permeability have developed substantially, it is worth stepping back to consider the various measurement techniques that can be used so that you can understand what the results mean and how they are produced.

No-matter what technique you use you will need to clamp your samples into a measurement chamber. Chambers are usually circular and isolate each side of the sample from the both the atmosphere and each other. The quality of this seal is critical in producing precise measurements. Most chambers can easily be adapted to test valves, seams or other sections of the airship construction and there is no practical size limit to this, although around 50cm² is typical.

The most common method for measuring vapour permeability is the swept gas technique and it works well for measuring helium permeation.

The test gas (e.g. helium, hydrogen etc) is passed over one side of the gas bag material fabric sample (which is frequently a laminated textile) with a carrier gas, such as nitrogen, on the other side. Typically both the test gas and the carrier are flow-controlled. These are frequently vented to the atmosphere to provide a benign pressure environment to the sample. As the gas under test permeates through the material of the fabric sample it is taken up by the carrier gas and delivered to a suitable sensor with a Parts Per Million (PPM) or PPB resolution. After a suitable period of time after setup, conditions stabilize At the point at which a stable measurement is achieved and the test is complete. The graph shows a typical results curve.

As coated textile samples samples become increasingly less permeable, accuracy can drop significantly, simply as it is difficult to measure very low volumes of the gas under test in the nitrogen flow. A technique which offers a smart way around this limit is to give the test gas longer to accumulate through the sample before it is swept on to the sensor. Using this method, when a steady state is reached the carrier gas is stopped, which allows the concentration of the test gas to build. A suitable time period later the carrier gas flow is resumed and the accumulated gas is transported to the sensor for measurement.

With the accumulation and purge method a test gas sensor is placed on the swept gas half of the chamber. The chamber is flushed out with the (typically nitrogen) purge gas and the helium/ hydrogen test gas is passed through the other side of the sample chamber. It can either be vented to atmosphere or lightly pressurized to duplicate the pressure inside an airship. When a low point is reached in the sensor concentration the purge gas flow is stopped. After a short period, the test gas that is flowing through the sample increases the concentration of gas in the chamber.

The slope (gradient) of the increase is proportional to the permeation rate. This effectively has taken the "swept and hold" process one stage further by only measuring the accumulation phase.

This measurement technique brings with it several advantages, particularly for airship gas-bag permeability measurements - because the gases around the sample are at or near atmospheric pressure, helping to seal the sample in the chambers. Secondly the sensor may be in the percentage level, which is a considerable saving on ppm or ppb sensors. Third the method can accommodate a broad range of permeation rates. Lower rates simply take longer to reach the same concentration.

Although this technique is infrequently used in airship development it has the advantage over the swept gas technique in that it does not require a gas-specific sensor but, instead, is based on the measurement of a pressure difference. This means it can be used for almost any gas - which is especially in cases where a gas-specific sensor is unavailable or expensive. In the cases of helium or hydrogen this is not a significant advantage and the technique has a downside in the difficulty in achieving a leak-free seal, additionally it could conceivably damage the sample.

The difference between the vacuum and atmospheric pressures is particularly problematic with this technique. The test gas is supplied to the sample at a higher pressure on one side than the other. This is typically achieved by evacuating both sides of the chamber, isolating the chamber from the vacuum and then providing the helium to just one side. As the helium passes through the sample, the pressure on the vacuum side increases. The gradient of the pressure increase is proportional to the permeation rate. The vacuum side is repeatedly evacuated and isolated and the calculated permeation rate reaches a stable value.

Our Versaperm MK VI meter produces accurate and reliable permeability results and has been specially adapted for and used by the airship industry. It can measure vapour permeability for both flat material samples as well as for complex finished airship components and containers.

It can, optionally, also measure vapour permeability for hydrocarbons and a wide range of other gases, including oxygen, nitrogen and water vapour.

Click here for a press release on airship permeability testing

Click here for an article on aerospace manufacturer on Wikipedia

Click here for information on the permeability measurement of Hydrocarbon