The vapour permeability testing of Geomembranes is required under UK, EU and international regulations. Not only does the membrane need to be a barrier against water and water vapour, but also it needs to act against methane, CO2 and a host of other gases and chemicals.  Unfortunately all of the leeching gases react differently to every type of material or liner, and a product that is highly effective against some of them may virtually useless against another.

For example PVC is around 25 times worse as a barrier to Carbon Dioxide than it is for Nitrogen. 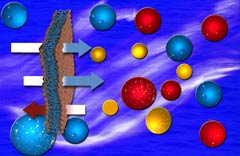 Versaperm equipment used to check the permeability of geomembranes

It is also sensible to test any jointing seams as well as the membranbes themselves
Geomembranes can be produced using extrusion, calendering, and spread coating techniques, each of which with could produce a membrane with a different vapour permeability.  This is partly due to the different physical processes involved and partially due, even if the same basic polymer is used, to the additives, such as antioxidants, plasticizers, carbon black, fillers and lubricants (which helps with the processing).

Amongst the most popular materials to use are HDPE, LLDPE, fPP, PVC, CSPE-R, EPDM-R, and others such as ethylene interpolymer alloy (EIA-R
Wikipedia currently lists all of the following Geomembrane applications areas 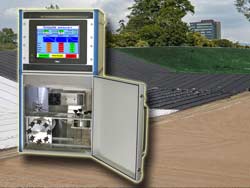 Click here for a press release on permeability testing for the liner membranes of land fill sites.